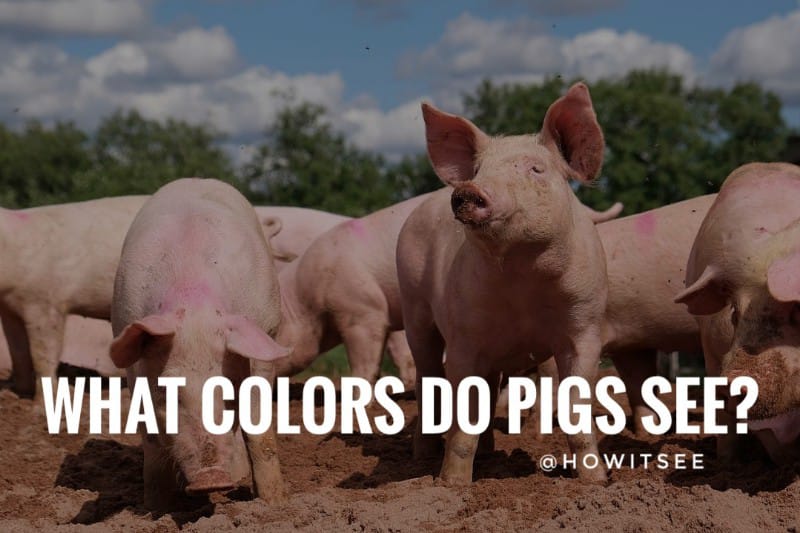 Pigs, also called swine or hog, are from the family Suidae and are variously considered a subspecies of the Eurasian boar. Many farmers wonder how to approach and nourish their domestic pigs without panicking them. So, you need to know about pigs’ vision or what colors do they see?

Pigs are dichromats and can see the world in blue, green, and red color shades. But they cannot distinguish the millions of color variations like humans do. Their vision is much more subdued than humans, and due to being dichromatic, they have large wavelength cones missing.

It means pigs can discern all variations of blue and green but do not have the capability to distinguish all red shades of different wavelengths.

Pigs are not colorblind. They can see the world the same as humans but in solid colors. Later in this post, we have explained Pigs’ vision and how they see humans and the world in detail. So, without any further ado, let’s begin.

What colors do Pigs see?

Pigs can see blue, green, and red colors but are sensitive to different wavelengths as compared to humans. They are dichromatic animals. It means the cones in their eyes are only primarily sensitive to small and medium wavelength colors, i.e., blue and green.

Simultaneously, humans are trichromatic; hence the cones in our eyes can perceive small, medium, and prominent wavelength colors, i.e., blue, green, and red. However, according to a recent study by PigVision Institute, it is unveiled that pigs’ eyes are least sensitive to red color up to 650 nm.

It demonstrates that there is a slight possibility that pigs can sense a small portion of red color. Below, we have inserted an image that illustrates the comparison between how humans and pigs perceive different colors.

As justified by the recent studies, pigs’ eyesight can perceive green and blue colors at peak wavelength sensitivity at 439 nm (blue color) and 556 nm (green color).

But it is also surfaced that photoreceptors in their eyes can barely sense a tiny part of red color under 650 nm. In comparison, humans can see every shade of color formed under the visible spectrum ranging from 380 nm to 720 nm.

In a nutshell, pigs see their environment predominately in blue-green shades like most animals. Therefore, to get a physiological response from domestic pigs, it is recommended to use a 380 to 580 nm light spectrum.

Pigs are not colorblind and can see the world with colors. They are nearsighted and have a wide range of visual fields with a little bit of depth perception. Also, their vision is not as clear as ours.

Also, being dichromatic, the color perception of the pigs is limited to the blue-green shades. Additionally, their photoreceptors tend to sense red color slightly. Below, we have inserted the image of how pigs see the world.

Many farmers claim that pigs manage to see objects as solid colors and dull vision. For example, pigs may see blue sky but cannot discern clouds and rainbows because of being nearsighted.

Pig owners also have to pay attention to making their pigs more comfortable with the environment. For this, they can use solid colors like red, green, and blue for the nearby objects so that pigs can easily distinguish them.

Apart from the vision, pigs have really good ears and noses. They can sense the world a lot more through sound and smell. Most of the time, they rely on their ears and nose for navigation and surroundings rather than the vision.

Also, their nostrils are sensitive, and through them, they can recognize their owners. Pigs’ vision is indeed poor compared to us, but if we compare their eyesight with other cattle, they see a lot better.

Can Pigs see in the Dark?

Pigs cannot see in the dark. Like nocturnal animals, they do not have a thin layer of reflective tissue on the back of their retina called tapetum lucidum. Pigs are diurnal and love to take rest at night. Also, their eyes evolved with more cones than rods that help them differentiate many colors rather than the ability of night vision.

Having fewer rods in their eyes makes it strenuous for pigs to identify the shapes of nearby objects even in the moonlight. Their vision is the same as humans at night. Humans also have very few rods in their eyes; that’s why we are not able to see anything in the dark.

Additional information: There are two types of photoreceptors in the retina: cones and rods.

Cones are responsible for color vision, and rods help to sense the light. Both humans’ and pigs’ eyesight are concentrated towards cones; however, many nocturnal animals comprise more rods than cones that assist them in navigating in the dark forest.

At night, pigs are more dependent on their other sanities to navigate.

They have a fantastic sense of smell, hear, and vibrations in the ground that allows them to recognize their environment with more accuracy than humans. It means pigs can easily outrun humans in the dark without any busting obstacles.

Do Pigs Have Poor Eyesight?

Pigs have poor eyesight compared to humans, but they have an average vision in contrast to other animals. It primarily depends on which animal we are comparing them to.

Pigs are dichromats, and their eyes have cones that qualify them to distinguish mainly blue-green colors. Also, they are nearsighted; still, they can see up to 300 feet which is far better than an elephant. Not only the sight, but they can also hear from far distances.

In conclusion, pigs have a good vision, but if we distinguish them based on color perception and clarity, their vision is not up to the mark.

Here, we conclude our article on “What colors do pigs see,” along with other related queries. We hope you like it to read. This information is also for general purposes only. We will be back with the next article. Till then, stay tuned with us and read the articles below.

Q1. Can potbelly pigs see in the dark?

Ans. Like other pigs, potbelly pigs cannot see in the dark.

The Science of Swine Vision pdf by Once

Monty is a founder of How It See. Being a life science student in a reputed university, he always wonders about an eclectic correlation between science and nature. After engaging in various college projects, Monty determined to share all his knowledge with you as a writer. In the meantime, he loves to research and study about the various types of colorful animals.